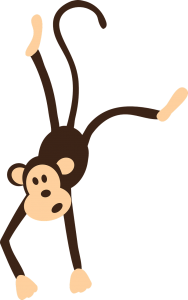 About
Youtube Five little monkeys is a cute nursery rhyme (kids song). The actual juxtaposition of the rhyme to music is therapeutic and soothing as well as entertaining. It has a simplifying content methodology using repetition and soothing vocals suitable for babies and toddler children, which makes it great to entertain children. Not to mention the costumed actors who are also children or cartoons / animation.

Origin
This Five Little Monkeys rhyme, according to Wikipedia, dates back prior to 1923. It now features with Youtube’s very own “Mother Goose,” and alongside are many other nursery rhymes aimed for the same audience of children.

Skills developed in Children through the “Five Little Monkeys” Rhyme experience
– Singing in rhyme practice using melody and also perhaps the same length of syllables placed one after the other.
– Ability to calm others through example and song.
– Fun watching other children of a similar age perform.
– Learning lessons through watching and the possibility to mimic what they’ve seen.

Topics explored
Monkeys are furry and the ones in YouTube videos are cute. So basically they get footage of cartoon monkeys or the other kids in costume performing the simple rhyme with good spirits. So it’s a great way for kids to relax, hear about other kids, possibly being referred to as monkeys or hear kids singing to the audience in a patient and entertaining way. Topics – monkeys or cute animals having fun on a bed, something which they can relate to, such as jumping on their beds or their relationship with their mom.

Another thing, it is also is a good gentle warning for kids that they may fall if they jump on their beds and make kids aware that this could be a safety issue. In fact, the Five Little Monkeys video theme is nice because children see there is multiple other kids there, and can feel companionship through rhyming and singing.