The Deeper Meaning of Nursery Rhymes 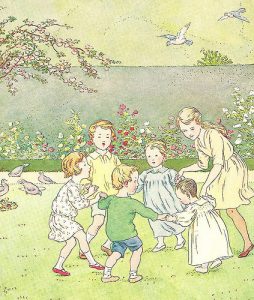 Happy Childhood Memories
The happy laughter of children playing patty cake. We would sing, “Baker’s Man” and “Miss Mary Mack”. When we tired of that we would hold hands and walk in a circle and sing, “Ring Around the Rosie”. Just thinking back to those days long gone days still brings a smile to my face. It would be much later in life when I would learn the meaning to some of those songs and the thought of their supposed meanings sent shock waves through my body.

Ring Around the Rosie
Now when I was singing and playing the nursery rhyme “Ring Around the Rosie” as a child. Not once did I ever think about the meaning. We would join hands and sing, Ring-a-round the rosie a pocket full of posie, ashes, ashes, we all fall down. In some versions of the song children would sneeze and then fall down. As the years rolled on, I finally learned what “Ring Around the Rosie” was about and the explanation made sense to me as I thought back over the lyrics of the song. “Ring Around the Rosie” appeared in 1881 and was sung to describe the Great Plague of London or Black Death. This song is nursery rhyme is also connected with superstition and Pagan beliefs that gifted children of fortune had power to laugh at roses. The ring of roses refers to bleeding under the skin. The pocket full of posies refers to herbs or flowers that people carried to ward off the disease. The sneezing was a symptom of the disease. The after the sneeze the falling down mention death. There are various verses of this song. The British version replaces the words, ashes, ashes with a-tishoo a-tishoo. There is even an Indian version of the song that begins ringa ringa roses.

The Lessons of The Black Death
A game in which children sing about a deadly disease sounds morbid but actually this game “Ring Around the Rosie” is a great teaching tool. How you might say. Well, many people, myself included never learned about this great tragedy in school. It estimated that 75 to 200 million people died. In fact, some figures say that this disease killed 30-60% of the European population. What can we learn from The Black Death or The Great London Plague? We can learn that this disease was spread mostly likely by fleas that lived on rats. The rats traveled in the cargo of ship. So, when the ships docked at a port the rats made their way into town and wreaked havoc by spreading this viscous disease. Also. it cause major upsets in the economy, religious up heavel and social unrest. Because people back then had no idea how the disease spread so faulty theories arose that caused groups of people to be greatly mistreated such as the poor. Yes, “Ring Around the Rosie” although a child’s nursery rhymes songs, can help our children learn about the past suffering of others.