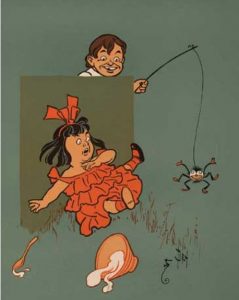 Little Miss Muffet is arguably one of the world’s most recognizable and beloved nursery rhymes. The precious poem was first published in 1805 in an English book entitled Songs for the Nursery. The same book also published other popular nursery rhymes like One, Two, Buckle My Shoe and Pussy Cat, Pussy Cat for the first time.

The origins of Little Miss Muffet are murky and much contested. One popular theory postulates that the noted doctor and naturalist Thomas Muffet wrote the nursery rhyme. The theory goes that Muffet was studying insects one day while his young stepdaughter was snacking beside him. When a spider that he was observing ventured too near the girl, she fled the scene. Dr. Muffet passed in 1604, more than 200 years before the poem appeared in print. While Muffet was a published author, his works were strictly scientific, and he was not given to poetry or whimsy.

Another popular theory is that Miss Muffet was inspired by Mary, Queen of Scots. This theory suggests that the sinister spider in the nursery rhyme was actually the influential Reformer John Knox. Queen Mary passed in 1587, and Knox passed before her in 1572. This puts them even further from the first publication of the poem than Dr. Muffet. Furthermore, there are no historical references that would tie the queen to the Muffet name, nor any published characterizations of Knox as a spider.

In all likelihood the intent behind Little Miss Muffet was for it to be enjoyed in the same way it is today. The first printed collections of nursery rhymes didn’t appear until the 18th century. By the time Miss Muffet sat on her tuffet, children’s stories like hers were rapidly gaining in popularity. As previously noted, several popular rhymes made their first appearance in 1805, suggesting that at least some of them were written specifically for that book.