About the Mother Goose Characters 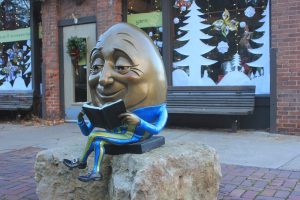 Everyone loves the story of Humpty Dumpty. The egg sitting on wall, losing balance and breaks. The disaster being so bad that not even King’s men could help Humpty Dumpty. When you read or recite the poem Jack Be Nimble you automatically envision a young lad jumping over a candle stick. Unless you are Don Mclean singing his mega-hit American Pie. In his version, Jack Be Nimble sits on the candlestick.

Then there is Mary Quite Contrary explaining how her garden grows. Every child imagines a little girl in garden surrounded by plants. Even though they might not know what silver bells and cockle shells are, they do know that Mary Quite Contrary needs them to make her garden grow. With the Little Bo Peep rhyme, every child can identify losing a pet and then being reunited. Children can see the concerned face of Bo Peep turning to pure joy when the sheep return.