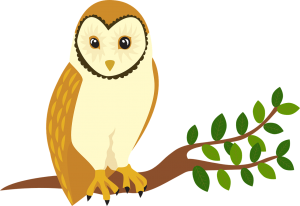 For thousands of years, the owl has been a symbol of wisdom since the times of ancient Greece. The owl was often representative of the goddess Athena or accompanied her in painting, sculptures and even in battles for armies of ancient Greece. As Athena is commonly known as the goddess of wisdom, this may have eventually led to the owl itself becoming to represent being wise.

It is also possible that the physical attributes and behavior of owls have contributed to its association with being wise. The bird has incredible eyesight, especially at night, and tends to be a quiet animal even when it does make its infamous hooting noises. In appearance, the calm demeanor does convey calm and poise. When hunting at night, the owl will often sit perched on a tree for lengthy periods of time, moving only it’s head as it uses superior eyesight to scan for prey. This conveys the appearance of a reflective thinker, conserving its energy and only making efficient movements like a weathered village wise man.

There is also a saying that wise men talk only because they have something to say, while a fool talks because he simply has to say something. This also may refer to how quietly owls behave, while being observant the entire time.

The nursery rhyme, A Wise Old Owl, is an American rhyme that while extremely short at only four lines, has been extremely popular in American culture especially with young children. The rhyme talks about a wise old owl that lived in an oak tree and spoke very little. The less the owl spoke, the more it was able to hear. Finally, the rhyme asks why we all can’t be more like this wise owl. The wise words of this rhyme were so universal, they were also used to build support for the war effort during World War II.