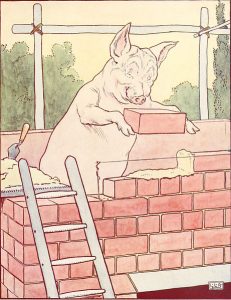 The story of The Three Little Pigs is said to have been printed at around 1840, but the story itself is believed to be much older than that. The story has been retold many times since it was created with little changes or modifications throughout history to better fit any one person’s telling of the story. Sometimes the wolf is even made into a kind character to better fit what the person telling the story is trying to get across. It is a large part of Western culture that has been told countless times to children throughout the years.

The Three Little Pigs was included in The Nursery Rhymes of England in 1886, but the version that is most recognizable to most people would be the one of the English Fairy Tales in 1890. The story has been retold many times, including the Little Piggies version and many others throughout history.

The meaning of the story The Three Little Pigs is that through hard work you can be better prepared in life. The wolf represents the challenges that may come up in your life unexpectedly that want to take away the happiness in your life along with the things that you might cherish. The morals of the story can leave you with 2 different meanings. The first of the 2 morals is that putting in time and effort into anything that you do in life will always pay off in the end. The second moral that you can come away with is that priority in your life is always important. The 2 pigs that did not build their house with brick were not as worried about any kind of conditions and were a little lazy in their approach, whereas the pig that did build their house with brick had themselves a rock solid home in which to protect themselves from the big bad wolf meaning that you should always take the time to do anything in your life properly.