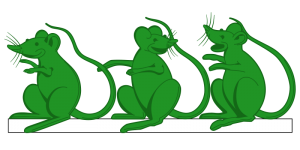 Nursery rhymes are something that we all love, and often remember for our entire lives. While often fun stories and songs, they can be used teach a child the English language and grammatical tools that will help them to become better readers and writers when they grow up. However, many of the songs and rhymes that we know today are references to historical events. This way of obscure storytelling has led to the creation of songs that have completely different meanings from the child friendly version we all envision. Perhaps one of the most iconic rhymes, is the Three Blind Mice rhyme. Curious kids may wonder who did the three blind mice run after and adults may wonder about its historical significance.

A Song as Old as Rhyme
The first written version date back to 1609, making it a story that has traveled in written form for over four centuries. The actual story that we all think of when we hear the rhyme, is actually quite different from the historical events that the story alludes to. The story is actually about three Protestant Loyalists, who opposed Queen Mary the First. At this time, saying no to the queen was strictly prohibited, the consequence being death. Many different twists and turns get applied to the story, but all of them ultimately involve three mice who lack the sense of sight, and end up wandering into their untimely demise, referencing the fact that the Queen and her husband, King Philip of Spain, killed the three Protestant Loyalists for disobeying.

Dark Stories in Fairy Tales
Now in the list of songs for kids, this one had a dark and morbid origin one doesn’t often know about. This practice is actually quite common with rhymes and fairy tales that stand the test of time. The lyrics are fun and innocent and do not paint a picture that is all that gloomy, except of course for the mice. When going about preschool education, its important to help the child see the historical significance of why these events were made into rhymes in the first place. In past times, children had to know what laws and rules were in place where they lived, for many children could be punished as an adult, and the punishments were often brutal. To teach children of these important events without scaring the child, but while keeping their attention, catchy and rhythmic rhymes were created. Even today, nursery rhymes are used and referenced in pop culture and other arts in all mediums.

Into Pop Culture
Teaching children about these songs is a good way to introduce a child to the arts, and to interest them in reading and music. One such pop culture reference would be the movie Shrek. The premise of Shrek is that an ogre has his swamp invaded by fairy tale figures, most of which come from songs and stories of old. Characters like Cinderella, Pinocchio, as well as The Big Bad Wolf and the Three Little Pigs are regular inhabitants of this world, and unwanted ones at that. One set of characters are the actual blind mice from the rhyme, taking the story literally as opposed to what the story actually refers to.